Bongs vs. Desktop Vaporizers: How Do They Compare? 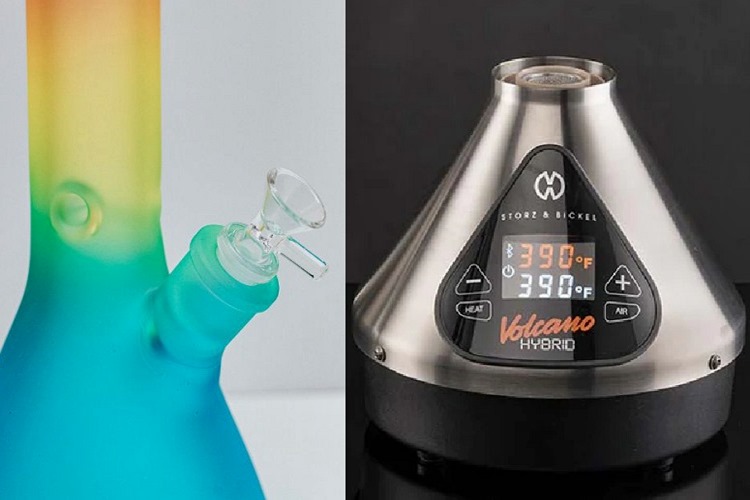 It’s fair to say that the majority of people under age 50 know what a bong is. In fact, most of them probably have personal experience with a bong, either as a regular thing or something they tried at a party once or twice. But it’s also fair to say that most of those people have no idea what desktop vaporizers are, and the questions that we get from customers in our Parker vape shop confirm this.

What we find maybe most surprising is the number of people who are under the impression that “desktop vape” is just a 21st-century term for “bong”. But the two devices are actually quite different. In this post, we’re going to take a close look at the difference between bongs and desktop vaporizers.

Exploring the Difference Between Bongs and Vapes

During the 60s and 70s, most people smoked joints. It wasn’t until the 80s that the bong started to take off as a way of smoking weed, and today the two are on basically equal footing. Most people who smoke joints also have a bong or two at home. Many of them also have smaller bongs that they travel with.

Desktop vapes, by comparison, are relative newcomers and it’s still pretty unusual to find someone who has ditched their bong for a desktop vaporizer. But those people are out there, and their numbers are growing every day. Let’s take a look at the difference between the two devices now.

A bong uses combustion. That is, the herb is actually burned and that burning produces smoke that is inhaled. The combustion process is capable of creating huge clouds of smoke in just seconds. Exactly how much smoke is generated depends on how long you hold the flame over the weed and how strongly you draw on the mouthpiece. The end result is that you can get buzzed faster using a bong than a vape. That’s the good news. The bad news is that a huge cloud of smoke can be hard on the throat and lungs.

Unlike a bong, a vaporizer uses convection. Convection is the same process that your gas oven uses. The air inside a chamber is heated and this cooks the herb producing a THC-laden cloud of vapor that is inhaled. The good news is that the hit you get is cooler than the hit produced by a bong and that makes it easier on your throat and lungs. The bad news is that the convection process requires a little more patience than combustion.

Bongs use water to filter impurities from the smoke and to cool the smoke down so that it doesn’t burn a hole in your lungs. If you don’t change your bong water for a long time it will take on a very nasty appearance and odor as it becomes infused with chemical compounds pulled from the smoke.

Vapes (can) use e-juice

One thing that seems to confuse people is that vapes use ejuice. Folks hear “juice”, think “liquid” and think it must just be another way to cool down the hit. But the two things have nothing to do with each other. Water is used to cool down the bong smoke. E-liquid is something that is actually vaped instead of vaping herb.

If you’re looking for a way to enjoy your herb that allows for a high degree of control over the process a bong is bound to let you down. The only control you have over things with a bong is to limit how much heat you apply and how hard you draw on the mouthpiece. That’s about it.

A desktop vaporizer on the other hand will provide a high degree of control over the cooking process. Among other things, you will be able to adjust the temperature, set it to shut off automatically, and choose whether to take your hit via a whip attachment or by way of a balloon bag.

These days the market is flooded with bongs of every conceivable size and shape. Many are quite small and can be easily transported near or far in a backpack. The only thing to be mindful of is that you empty the water completely before stowing the bong in your pack.

As the name implies these units are designed to sit on your desk, kitchen table or coffee table. Most plug directly into the wall, which is great in that you don’t have to worry about batteries dying, but is not so great in that you won’t find a power source for them when you’re hiking in the mountains.

The Best Place to Buy Desktop Vapes and Bongs

You can buy bongs and vapes online of course, but in our humble opinion, these are the kinds of things that are best purchased in person. When you walk into the Smoking Buddha you’ll find an extensive variety of bongs, vaporizers, vaporizer mods and other paraphernalia that will take your experience to the next level. Hold them, compare them to one another, get a feel for their weight and ask all the questions you want. We’re here to help. The Smoking Buddha is easy to find, just do an internet search for “vape shop near me in Parker” or call us at (303) 840-4388.