The Benefits of Vaping vs. Smoking 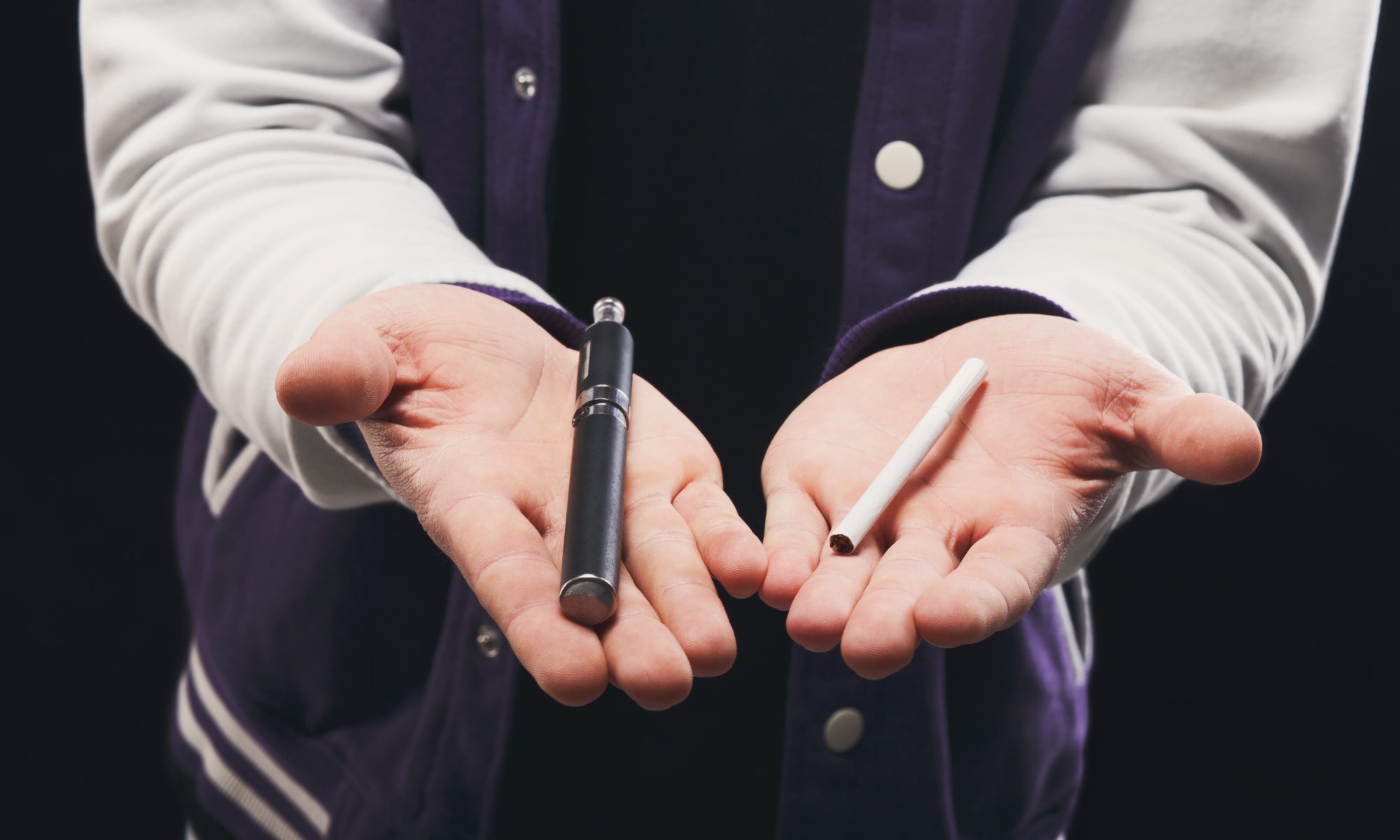 There seems to be a rather significant transition in the world of smokers. Instead of the huddled masses circled around a shared column of tobacco smoke that each member contributed too, there’s now a line of vapers, each one pulling from an electronic device that can look more like a cassette tape adapter than a cigarette. Instead of asking to bum a smoke, coworkers are now asking if you could share your charging cord to make sure their Juul or vape pen is fully charged before their break. Instead of the thick, heavy smell of tobacco smoke that permeated the walls at your aunt’s or uncle’s house, there’s an artificial sweetness aftertaste that lingers in the air.

There’s no doubt that vaping is seen as the future of smoking. With customizable vape devices, flavored e-liquids that can cover a wide assortment of different taste buds, and a smokeless byproduct, many people are switching over to vaping in an effort to limit the amount of tobacco smoke in their lives.

But, is vaping actually better for you than smoking? It’s a tough question to answer and perhaps the essential point of contention in the vaping vs. smoking debate. With some facts and data on your side, though, you’ll be able to make the best choice for yourself and help enlighten others in your community.

What Exactly Is Vaping?

At its heart, vaping is very similar to smoking. However, there are key differences. While smoking inherently involves inhaling and exhaling smoke, specifically tobacco smoke, vaping is the inhaling and exhaling of an aerosol that is created by an e-cigarette or vape pen. Many people will refer to what an e-cigarette produces as water vapor, which it is, but technically it’s an aerosol that carries with it a flotilla of very fine particles.

Whether you’re using an e-cigarette, a vape pen, or a customizable vaporizer (often referred to as a “mod”), the basics of the device are similar. You’ll be dealing with a mouthpiece through which you inhale the aerosol, a cartridge that holds the e-juice, and a battery-powered heating component. When in use, the heating component raises the temperature of the aerosol until an inhalable product is created.

The e-liquid or e-juice used is generally a propylene glycol or vegetable glycerin-based liquid that’s fortified with nicotine, flavoring, and other chemicals. However, it’s possible to use a vape device for cannabis consumption, as well as any number of inhalables, instead of e-juice.

The Basics of Tobacco Smoke

For the uninitiated, smoking involves the lighting of tobacco and the inhaling of the produced smoke. Typically, the tobacco is wrapped in paper, such as with a cigar or cigarette, or stuffed into a pipe. The tobacco often includes a host of other chemicals, as well, making it particularly harmful to those who inhale it directly or second-hand.

In fact, per the Center for Disease Control, cigarette smoking is the number one cause of preventable death in the country. Smoking kills more people each year than the combined total caused by alcohol use, automobile accidents, drug use, guns, and HIV. While the number of smokers has declined over the past several decades, the risk of dying from cigarette smoke has actually grown over the past half-century.

In today’s organic produce and granola world, there may be some thought that because cigarettes contain tobacco, a plant, while e-liquids contain mostly chemicals, smoking cigarettes may be more beneficial. However, that is just not the case. Tobacco smoke contains thousands of chemical compounds. These chemicals are supposedly added for the benefit of the smoker, to make the smoke less harsh and more flavorful, however many of them are known to cause cancer. Ammonia, arsenic, carbon monoxide, lead, and even uranium are all present in tobacco smoke.

How Vaping and Smoking are Different

The two main differences between smoking and vaping are the device used and the contents of the product being inhaled. Smoking involves burning tobacco in a rolled paper product or a pipe while vaping uses an electronic device to heat a liquid until a vapor-like product is created. If you smoke, you’re also inhaling a boatload of tobacco smoke and tobacco by-products. However, the juice utilized by a vape device typically does not contain tobacco.

Diving deeper into the contents of what’s being inhaled, there’s a clear distinction in the two nicotine products. The FDA has investigated some e-liquids to determine the ingredients, and, in doing so, found chemicals that are not present in tobacco smoke, including antifreeze, formaldehyde, and benzene. While these chemicals are found at higher levels in e-liquid than in their tobacco counterparts, it is still believed that the aerosol byproduct of vaping contains a lower concentration of toxic ingredients. In fact, tobacco smoke may provide nine to 450 times the level of toxic substances found in vaping aerosols.

So, Is Vaping Healthier Than Smoking?

The question of safety and health when it comes to the vaping vs. smoking debate is a complicated one. Yes, on the one hand, smoking is one of the leading causes of death in America and, as previously stated, the number one cause of preventable death in the country. Its smoke contains hundreds of chemicals, many of which cause cancer. There is no disputing that.

Further, there’s very little reason to believe that vaping exposes you to more toxic chemicals than cigarettes. There generally is no tobacco in e-liquids, and the vapor-like aerosol mitigates the harshness caused by inhaling smoke than a vape device produces. Additionally, many vapers speak of how vaping has freed their lives and allowed them to cut down on smoking cigarettes. If that’s the case, then vaping can have a benefit for individuals, as long as they continue to use it as a way to wean themselves off tobacco smoke.

Yet, it’s difficult to say with absolute, scientific certainty whether vaping is truly healthier than smoking simply because vaping is such a new development in society. To conduct studies on the health impact of vaping, researchers would need decades of data to ascertain and analyze the typical long-term results of years of vape device use.

Even when it comes to the use of vaping as a smoking cessation device, the current studies are fairly ambivalent. While most appear to say that those who are vaping are indeed trying to quit smoking, the results show that most of those cases still result with the user continuing to smoke tobacco. While there are individual successes, and it’s possible that you would be one of them, it’s important to note that the FDA has not approved vaping as a treatment for nicotine addiction.

If you have questions about vaping, make sure to reach out to The Smoking Buddha today! Our extensive product lineup makes us perfect for vaping veterans, while our knowledgeable, helpful staff make the ideal experts for newcomers. So, whether you’re looking to try out a new Juul, are unsure about the best e-liquids for your device, or are looking for a stellar tattoo to begin or add to your collection, make sure to stop by our vape shop and tattoo parlor, located in the Denver area. You can also give us a call at 303-840-4388, or use our simple contact form to get in touch today!